Press Release: Annual Poll Finds Widespread Concern About the Impact of the Pandemic on K–12 Students 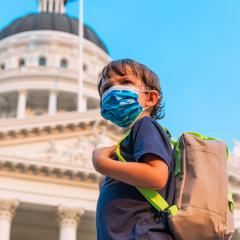 In the latest edition of the annual PACE/USC Rossier poll, partisanship is running high, but there’s still widespread agreement on how to help students catch up academically.

Californians are concerned about the impact of the pandemic on the state’s students and strongly support specific efforts to address their learning needs as the pandemic eases, according to new public opinion research from the 2021 PACE/USC Rossier poll released today by Policy Analysis for California Education (PACE) and the USC Rossier School of Education.

Respondents expressed very serious concerns about students falling behind academically, the needs of students with disabilities or those learning English, and the impact on students’ emotional and mental health. Lower income and Black voters expressed even higher levels of concern.

“The most important work schools can do right now is figure out how they’re going to build and rebuild relationships between themselves, their students, and the parents they serve,” said USC Rossier School of Education Dean Pedro A. Noguera. “Even as we focus on reengaging kids academically, we will also need to focus on and address their social and emotional needs.”

Voters enthusiastically support a range of measures such as summer school, intensive tutoring, afterschool activities, expanded sports and physical activities, and more work to accelerate learning in the wake of the pandemic.

“The data indicate strong public support for important measures to improve learning,” said PACE Executive Director Heather J. Hough. “The state’s education leaders and policymakers now have a roadmap for action, especially for low-income students who have been disproportionally impacted by the COVID-19 pandemic.”

But steps to improve the quality of public education in the wake of the pandemic are potentially threatened by very high levels of political partisanship and division over views on race and racial justice. Directions the state takes on education will be informed by a growing partisan divide.

Approval of how well local officials handled school reopening and pandemic schooling also fell along partisan lines, with Democrats more in support of the work of government officials than Republicans. In terms of overall policy priorities, “climate change” ranks first for Democrats; “the amount we pay in taxes” is the highest priority for Republicans.

When asked how much time schools should spend teaching grade-appropriate lessons about the causes and consequences of racism and inequality, a strong majority of Democrats (82 percent) indicated that they support schools spending more time, compared to a majority of Republicans (54 percent) preferring that schools spend less time on those topics.

Other opinions from California voters: