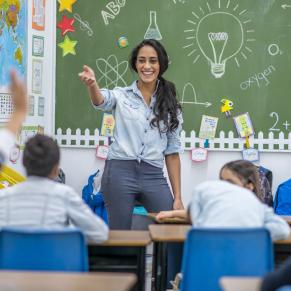 Educator quality is the most influential school-based factor that contributes to student outcomes.  In California, the teacher pipeline is comprised of institutions that provide teacher candidates with opportunities to learn the knowledge, skills, and capabilities in the California Standards for the Teaching Profession. K-12 schools play a large role in this system, teaching novices the K-12 curriculum, providing the learning context for all field placements, as well as providing mentor teachers for student teaching placements and induction mentors.

Efforts to find qualified teachers has become more challenging in California, as the number of emergency teaching credentials has more than doubled since 2012-13. School leadership is similarly important and challenging. Policy and practices to build teacher and principal quality in California will need to take into account growing demand, fewer qualified people for positions, and high turnover.

PACE's work in this area is designed to highlight the problems and help the state work toward evidence-based solutions.

About 75% of districts in California report teacher shortages, that is, these districts are having greater difficulty filling classroom positions with people certified to teach in certain subject areas, which affects the qualifications and quantity of teachers hired. Teacher shortages are most severe in rural and high-poverty urban areas, and schools serving high concentrations of students of color, English learners, and low-income students.  Districts also face shortages of fully certified teachers in particular subject areas including Special Education, mathematics, science, and bilingual education. In math, for example, there are half as many fully prepared teacher candidates with preliminary credentials entering the workforce today as there were six years ago.

What are issues in the school principal workforce in California?

Getting Down to Facts II research found that California’s overall principal turnover rate is higher than in many other states. In 2015-16, more than one in five principals left their schools, with about two-thirds of these leaving the profession or the state, and the other third moving to other schools and districts.

Typically, more experienced principals are more effective, but low-achieving, high-poverty schools are more likely to have novice principals. Fifty-three percent of principals in schools in the bottom 20% in student achievement are in their first three years on the job, compared to only 26% of principals in schools where student achievement is in the top 20%. Turnover rates show a similar disparity. A principal in one of California’s high-poverty urban schools is 50% more likely to leave than one in a low-poverty suburban school.

Do California’s students have access to school-based health and mental health providers?

Increasing Access to Universally Designed Mathematics Classrooms
While California Common Core State Standards in Mathematics (CA CCSSM) call for rigorous mathematics for all students, students with disabilities have not been provided equal access to instruction that meets these standards. Universal Design for…

California’s Special Education Teacher Shortage
California is in the midst of a severe special education teacher shortage that threatens the state’s ability to improve outcomes for students with disabilities, who often have the greatest needs but receive the least expert teachers. To help…