The full policy implications of the Common Core State Standards (CCSS) for Mathematics and English Language Arts K-12 are just beginning to unfold across the 45 states (and DC) that are working to implement them. The CCSS will impact almost all key state education policies in fundamental ways. As we learned from the 1990-2005 era of systemic state standards-based reform, when academic standards change, so do policies related to student assessment and school accountability. Moreover, many other specific policies must be aligned and harmonized, including state curriculum frameworks, instructional materials, K-12 and college assessment, K-12 finance, professional development, teacher evaluation/preparation, preschool, and others (Fuhrman, 1993). In this brief, I outline what the Common Core will mean for California education policy in each of these important areas.

Some background: Before 1990 most states, including California, did not have a single set of grade by grade K-12 academic content standards in ELA and Mathematics that every district was required to adopt and every school was required to teach. A student in a family that moved from one district to another might wind up studying very different material, even if he or she stayed in the same grade. Eventually the idea of creating uniform K-12 academic standards within a state took hold, although each state in the U.S. developed and adopted its own set of standards for its schools and students. As states pursued a standards-based reform strategy from 1990 to 2011 they also created assessment-driven instruction policies designed to penetrate into classrooms. Many California teachers merely posted the state standards to be taught each week at the front of their classrooms. However, teacher content coverage gradually began to change, and many teachers began meeting with their colleagues to work on attaining state standards. Public awareness and acceptance of the concept of state adopted academic standards is now well established. Today California residential real estate brokers routinely provide the state Academic Performance Index results of local school to parents shopping for homes.

Where we are now: Figure 1 depicts graphically many of the state policies that must change to be aligned and coherent with Common Core State Standards. As elsewhere, policymakers in California must eliminate contradictions between policies, look for gaps where no policy currently exists, such as instructional transition from prekindergarten to kindergarten, and ensure that newly aligned policies like those concerning professional development have sufficient breadth and depth to cover all teachers who need help. 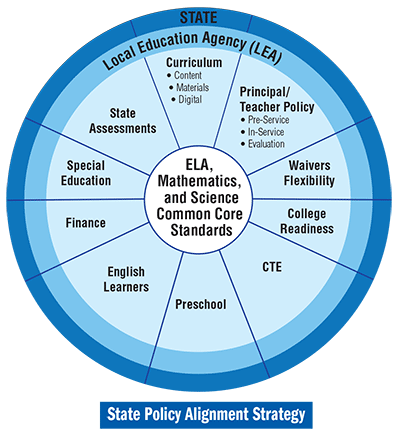 For example, in the past the introduction of ambitious learning standards conflicted with assessment policy because existing multiple choice assessments failed to measure the deeper learning needed by students, and provided too little information to teachers about student performance. This conflict should be avoided with the Common Core State Standards because an equal amount of effort is going into the development of next generation, computer-adaptive student assessment systems that will more robustly measure student learning against the standards.

The Common Core State Standards are designed to transform current instruction by focusing teacher attention on fewer, higher, and deeper standards (NGA/CCSSO, 2010). Current state assessment and accountability systems in California, however, are not aligned with the Common Core’s specific instructional approach.

The Future of Education in California