The Early Implementation of California’s System of Support 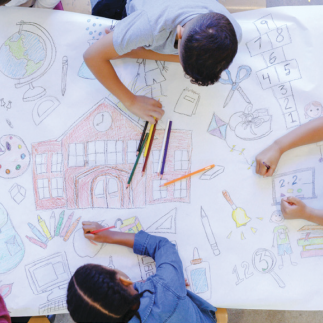 California’s new Statewide System of Support is grounded in the fundamental principles of the Local Control Funding Formula, especially its emphasis on the central role of local educators in determining the best approaches to improvement. This report examines the early implementation of the System of Support, with a focus on the work of the county offices of education (COEs) and the experience of the districts identified for differentiated assistance.

COE and district officials held positive views of the key shifts in the System of Support, particularly the emphasis on support over compliance and the empowerment of local districts as decision makers in their own improvement efforts. However, COEs differed in the definitions of their role in this new system, depending on the contexts in which they worked. These definitions ranged from being the main source of assistance on all challenges facing their districts, to being a thought partner primarily for implementing improvement processes, to brokering sources of support beyond the COE where COE capacity was insufficient to meet district needs. COEs in our case studies had made significant efforts to boost their internal capacity to support their districts and had worked to break down internal silos between various departments. Nonetheless, while officials in our case study districts appreciated the efforts of their COEs, many experienced the support as less than adequate to address their challenges. Both COE and district officials raised concerns about the under-resourcing of the support system.

A major influence on the effectiveness of the system of support is the Dashboard. Districts are identified for differentiated assistance based on their performance on the Dashboard, a measurement tool that employs multiple indicators and disaggregates the performance of student subgroups. While interviewees found the Dashboard an improvement over the previous single-measure Academic Performance Indicator (API), they expressed numerous concerns. Among these were that the Dashboard undermines the focus needed for sustainable improvement and generally fails to provide data that are sufficiently timely, valid, and comprehensible to guide improvement. In addition, respondents expressed concerns about the equitable distribution of support and the truncated timeline for assistance.