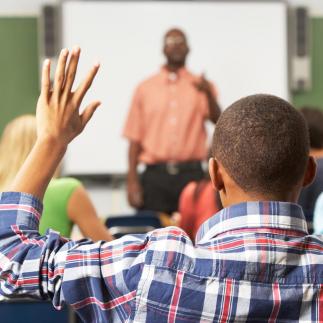 We use data from the 2020 PACE/USC Rossier annual voter poll to report on California voters’ attitudes towards educational equity policy initiatives, specifically: (a) increasing the number of public school teachers of color in California and (b) requiring all high school students in California to complete an ethnic studies course. A majority of voters supported these initiatives. Respondents showed higher levels of support for increasing the number of teachers of color when informed about the positive academic impact this would likely have for students of color. Support varied depending on voters’ race/ethnicity and political party. White respondents were less likely to support the initiatives as compared to African American and Latinx respondents; Republicans were less likely to show support as compared to Democrats and Independents.

Shortly after taking office in 2019, California State Superintendent of Public Instruction Tony Thurmond signaled his priorities by launching the “Closing the Achievement Gap” initiative.  This initiative laid out near-term and long-term strategies for “narrowing gaps across marginalized communities.”

The recent PACE/USC Rossier annual poll shows that California voters are largely on board with Thurmond’s vision: as seen in Figure 1, 47 percent of voters felt that “closing the racial achievement gap in education” was a “high” or “top” priority, with an additional 29 percent reporting it as a “medium” priority (versus “low” or “not a priority”), and 5 percent unsure. However, overall prioritization levels differed by voter subgroup (see Figure 2). African American and Latinx voters gave relatively higher priority levels to the issue compared with White and Asian American voters. While 73 percent and 60 percent of African American and Latinx voters, respectively, described the issue as  a “high” or “top” priority, these numbers were only 41 percent and 26 percent for White and Asian American respondents. Similar variability was seen across political parties, with 60 percent of Democrats prioritizing the issue, compared with 39 percent of Independents and 29 percent of Republicans.

Figure 1. How Much Do California Voters Prioritize Closing the Racial Achievement Gap in Education?

Figure 2. Percentages of California Voters Who Believe Closing the Racial Achievement Gap is a “High” or “Top” Priority 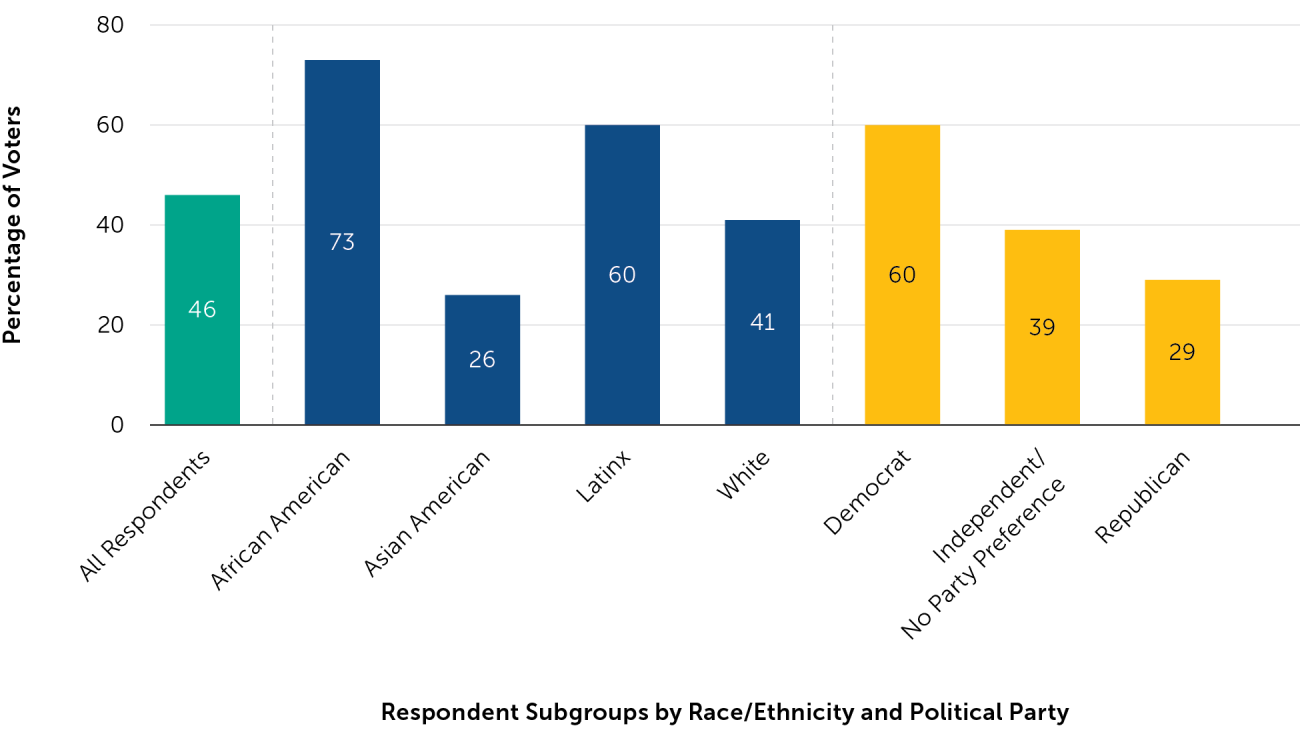 To what extent do these levels of abstract prioritization translate into support for specific policies and initiatives? We sought to find out by polling California voters on two specific equity-related initiatives currently receiving attention in California: (a) Superintendent Thurmond’s initiative to increase the number of public school teachers of color in California and (b) a proposal that would require all high school students in California to complete an ethnic studies course.

Research shows that for African American students, having an African American teacher in elementary school increases the likelihood of taking a college entrance exam by five percentage points and decreases the likelihood of dropping out of high school by the same amount.  African American males are over three percentage points less likely  to experience exclusionary discipline (such as suspensions and expulsions) when taught by an African American male teacher versus a White female teacher.  Similar positive effects of student–teacher racial match have been found on student test scores, teacher expectations, and student favorability ratings of teachers.  These findings have implications for our students: in California, 73 percent of public school students are people of color but only 38 percent of public school teachers are people of color.

Superintendent Thurmond has therefore prioritized increasing the number of teachers of color in California, particularly men of color. This strategy includes seeking financial support from foundations to sustain and grow existing efforts in teacher preparation programs to recruit and mentor men of color. We sought to understand the extent to which voters supported this goal, and whether voters’ support depended on the background information we gave them about the rationale for these efforts.

Figure 3. Importance of Increasing Number of Teachers of Color in California

However, voters’ support for increasing racial diversity among teachers was not uniform, with opinions differing by respondent race/ethnicity and political party. As seen in Figure 4, when we pool across conditions, African American and Latinx voters overall were more likely than White and Asian American voters to endorse the initiative, with 82 percent of African American and 66 percent of Latinx voters voicing support, versus 55 percent of White voters and 54 percent of Asian American voters. Democrats were more likely   than Independents or Republicans to support the efforts, with support levels at 73 percent, 53 percent, and 41 percent, respectively.

Figure 4. Percentage of Voters Who Believe It Is Important to Increase the Number of Teachers of Color in California 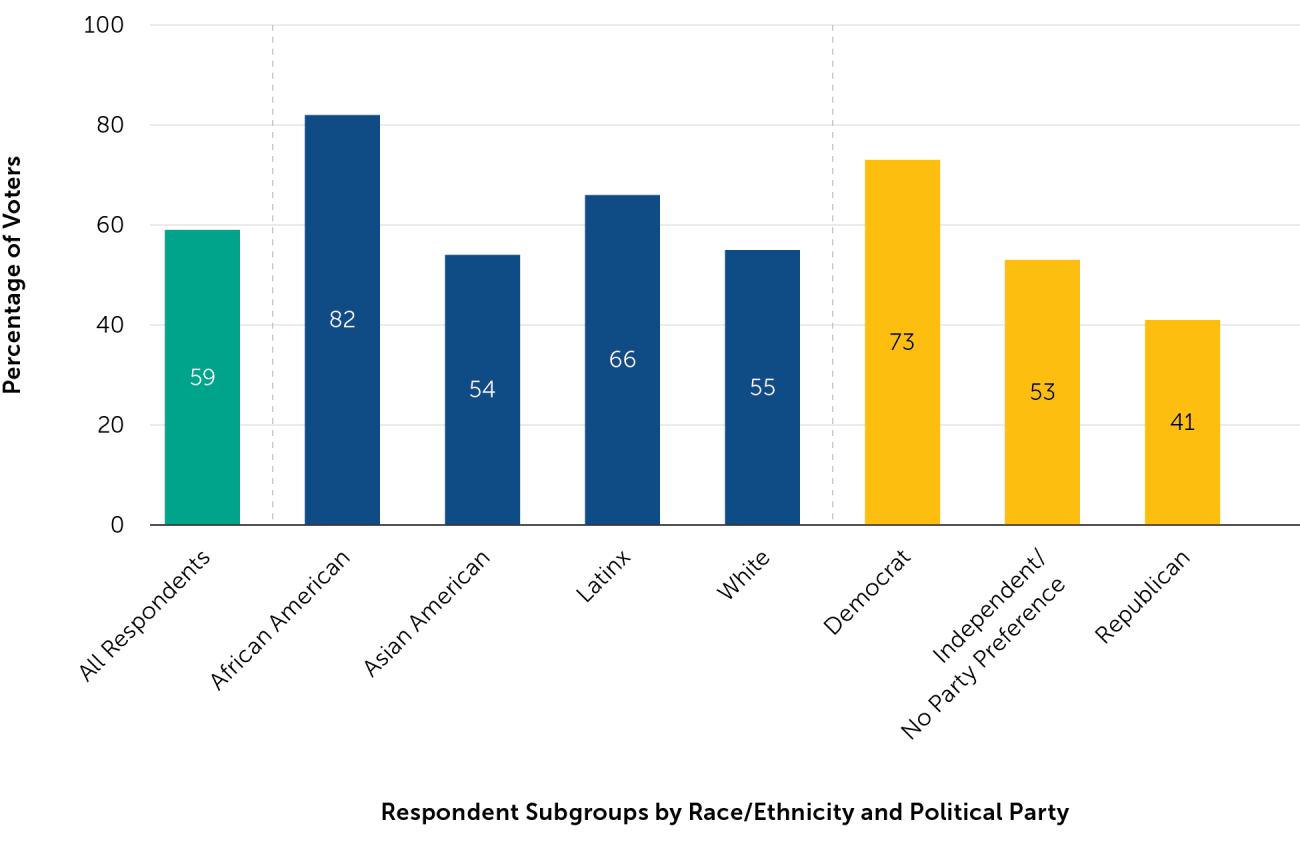 In January of 2019, California Assembly member Jose Medina introduced a bill that would mandate ethnic studies as a high school graduation requirement in California.

The field of ethnic studies has been defined as “the critical and interdisciplinary study of race, ethnicity, and indigeneity with a focus on the experiences and perspectives of people of color within and beyond the United States.”  Medina, a former ethnic studies teacher himself, explained that students are more engaged when they see themselves reflected in the curriculum. A goal of introducing this graduation requirement was to give students the opportunity to learn about “histories outside of the Euro-centric teachings most prominent  in our schools."  At present, the California Department of Education is revising the draft curriculum after objections to the initial draft from some ethnic and religious groups, including Jewish leaders who criticized the omission of discussion about anti-Semitism.  Prior to the 2020 PACE/Rossier poll, the level of public support for this graduation requirement was unknown. 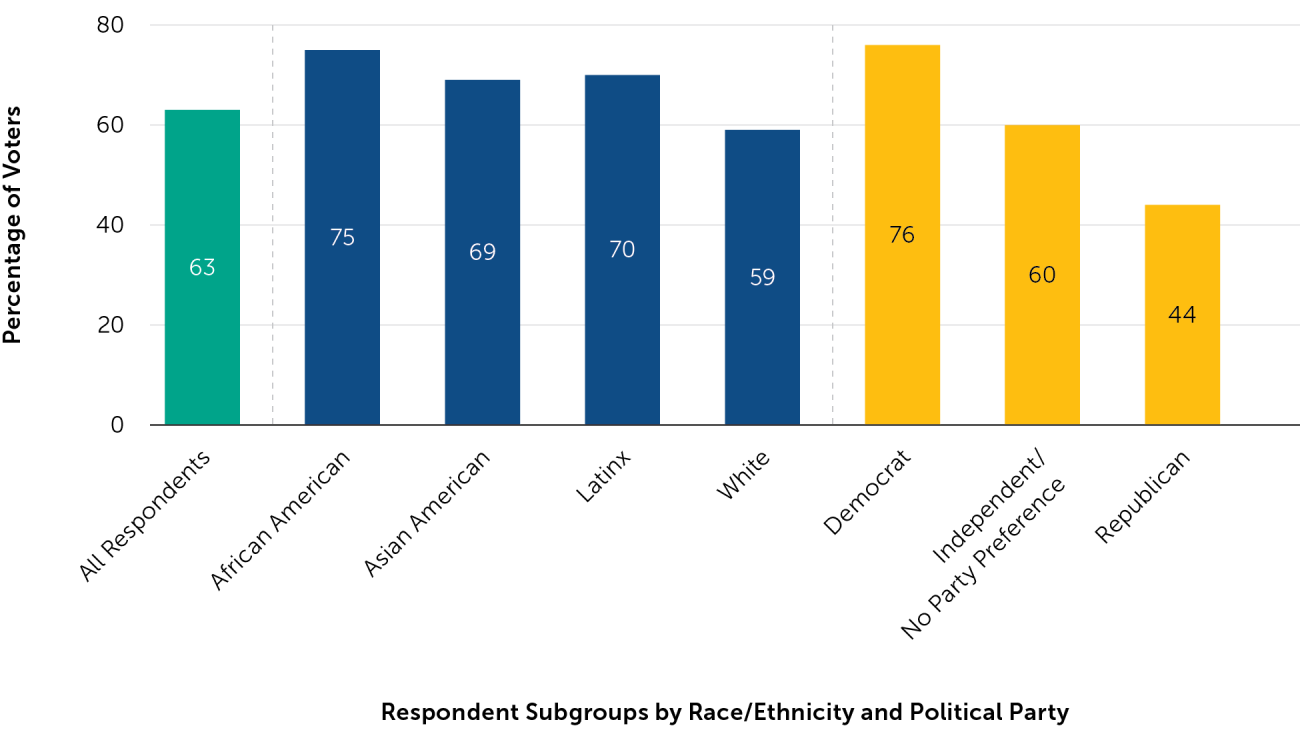 California’s Department of Education has recently taken up initiatives to create more equitable learning experiences for students of color. In our poll of California voters, we found that the majority of voters not only support the general vision of making education more equitable but also support specific equity-focused efforts currently in development.

The majority of voters endorse the goal of increasing the number of public school teachers of color in California. Our findings also suggest that diversity efforts such as the one currently being led by Superintendent Thurmond may be more effective when the public is informed about the research on how students of color can benefit from having teachers of color. Although support levels differed by race/ethnicity and political party, Republicans were the only subgroup in which a minority of respondents felt it was not important to increase the number of teachers of color. This was true regardless of whether or not Republicans were informed about the potential benefits for students of color. For this subgroup, then, alternative strategies would likely be needed in order to earn full support for such efforts.

Footnotes and explanatory notes can be found in the full brief here.