What Do Changes in Social-Emotional Learning Tell Us About Changes in Academic and Behavioral Outcomes? 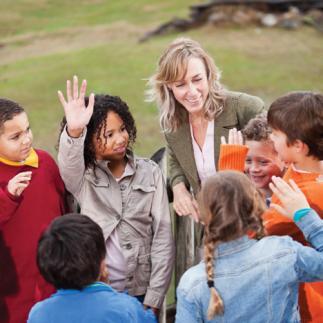 Prior work has shown that levels of self-reported student social-emotional learning (SEL) predict student achievement levels—as well as student achievement gains—but little has been done to understand if within-student changes in student reports of SEL are predictive of changes in theoretically related academic and behavioral outcomes. We use data from the California CORE Districts to examine whether changes in individual students’ reports of their social-emotional skills from one school year to the next predict changes in state math and English language arts (ELA) test scores and attendance. We find that within-student changes in self-reported SEL predict changes in ELA achievement, math achievement, and attendance. These results are robust across model specifications and are stable across a wide variety of student subgroups.

Supporting Students' Social-Emotional Learning as a Force for Recovery

In recent years, many advocates have called for schools to pay greater attention to holistic aspects of schooling, arguing for whole-child education, attention to noncognitive factors, and programming to support student social-emotional learning (SEL). Pointing to research showing that social-emotional competencies are strong predictors of academic and career success, many have suggested that a greater focus on student social- emotional development translates to higher academic achievement and a reduction in racial and socioeconomic disparities.

As consensus builds around the ability of SEL to improve academic and career success, school systems are increasingly seeking ways to measure students’ social- emotional development. The CORE Districts—a nonprofit collaborative of California school districts focused on data-driven school improvement—have led the charge to both measure SEL and understand the relationship between SEL and student learning.Since 2014, six of the CORE districts, which collectively serve over one million students, have surveyed students in Grades 4–12 on self-management, growth mindset, self-efficacy, and social awareness.

Since 2017, the CORE–PACE Research Partnership has produced a number of studies exploring the measurement properties and use of the SEL surveys. This research has shown that the survey items were developed based on research evidence, that they have broad buy-in from school and district leaders, and that the items themselves function moderately well psychometrically. The SEL survey scores are also predictive of measures of student achievement and behavior such as test scores, grade point average, attendance, and suspensions; research provides evidence that students in different classrooms develop SEL skills at different rates.

Building on this research base, this brief answers the critical question: Do students’ academic outcomes improve alongside improvements in their SEL? Specifically, we ask: (a) Are changes in students’ self-reported social-emotional skills predictive of changes in their academic and behavioral outcomes; and (b) Do the relationships between SEL changes and changes in other student outcomes vary by student characteristics such as gender, race, economic disadvantage, prior academic achievement, and prior SEL?

When the CORE Districts developed their shared accountability system under a No Child Left Behind waiver in 2013, they sought a measurement system that looked beyond pure achievement measures. From this goal was born a multiple-measures system that includes survey-based measures of SEL as well as school culture and climate, alongside both traditional academic (e.g., English language arts [ELA] and math performance and growth) and nonacademic (e.g., chronic absenteeism and suspension.rates) measures. Six of the eight CORE districts have administered the SEL survey each year since 2014–15 to students in Grades 4 through 12.12 The survey comprises a battery of items designed to measure four dimensions of SEL (see box).

The results presented in this brief focus on a group of 49,216 students who were between fourth and seventh grade in the 2014–15 school year and participated in the CORE Districts SEL survey during the 2014–15, 2015–16, and 2016–17 school years. We describe the relationships between year-to-year changes in our four SEL constructs within students over this 3-year period and similar changes within students in three outcome measures: SBAC math scores, SBAC ELA scores, and attendance rate (measured as the ratio of days attended to days enrolled). We standardize all SEL and outcome measures by grade and year so that we track each student’s levels relative to their peers in the CORE districts. This research identifies four key findings.

Finding 1. When SEL Improves, So Do Academic and Behavioral Outcomes

While previous work has established that higher levels of SEL tend to be associated with higher levels of academic and behavioral outcomes, we sought to better understand whether academic outcomes improve (or decline) alongside improvements (or declines) in SEL. We found that students’ SBAC math, SBAC ELA, and attendance increase more during years in which students’ SEL shows greater improvement.

What Dimensions of SEL Does CORE’s Student Survey Measure? 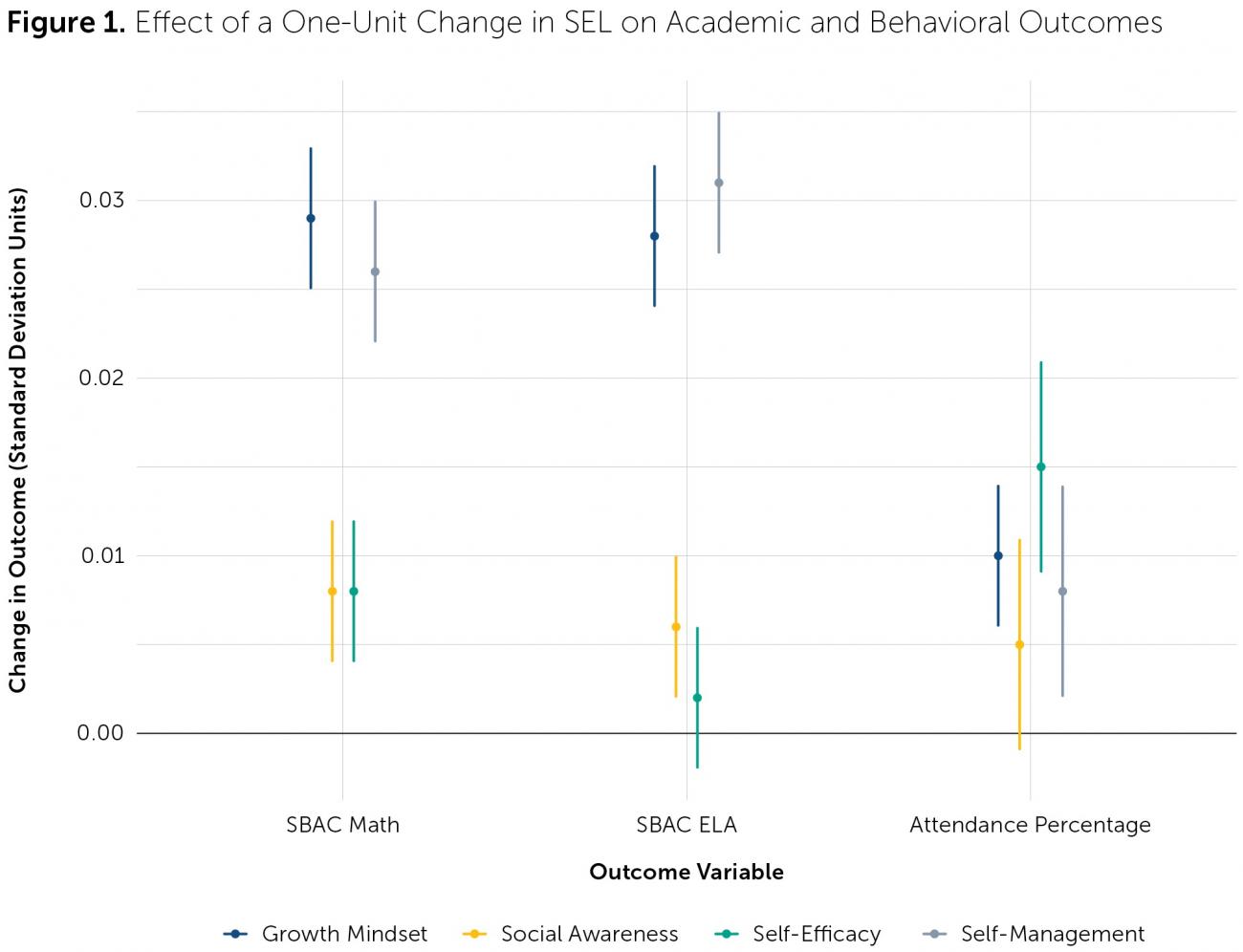 Figure 1 presents the size of the associated change in SBAC math, SBAC ELA, and attendance when a student undergoes a change in SEL. For each outcome, the dot indicates the effect, in standard deviation units, of a one standard deviation increase in that SEL construct, with the line indicating the 95 percent confidence interval. For clarity, the figure shows a dashed horizontal line at zero to help quickly distinguish effects that are statistically significant. Higher placement on the vertical axis indicates a stronger relationship between SEL change and change in either state tests or attendance rate.

We observe that students who experience greater gains in self-reported SEL relative to their peers also experience greater increase in achievement; changes in growth mindset and self-management are associated with the largest changes in SBAC scores. For example, when a student moves one standard deviation higher relative to their peers in growth mindset, math scores tend to increase by an additional 7.97 to 25.06 percent of the average annual learning gains associated with grade promotion. Similarly, a one standard deviation change in self-management is associated with additional gains from 7.15 to 22.47 percent of peers’ average annual learning gains. These changes are nearly triple the magnitude of the changes associated with social awareness and self-efficacy, but even changes in these SEL constructs predict improvements in math. For SBAC ELA, we see a similar pattern, but in this case, the changes in SBAC scores associated with changes in self-efficacy are not statistically significant.

The key observation is that students who experience greater gains in self-reported SEL relative to their peers also experience greater gains in ELA and math test scores and, to a lesser extent, attendance. These associations are strongest for growth mindset and self-management and are robust to model specification (as demonstrated in the full working paper). They are also substantively meaningful, when we consider other research on student learning.

Finding 2. Improving SEL is Associated With Roughly Equal Improvements in Outcomes for All Students, Regardless of Demographics

Previous research has shown large differences in student-reported SEL by gender, race/ethnicity, language status, and socioeconomic status.19 As a result, the relationship between changes in SEL and changes in other outcomes might differ across groups. The overall effect might be driven by a single group or spread broadly across groups. For this reason, we assessed how changes in SEL predict changes in other outcomes for students in 12 subgroups. We found that there is a similar effect of improvements in SEL for all students, regardless of demographics. Here we focus on math, but the results are consistent across outcomes. 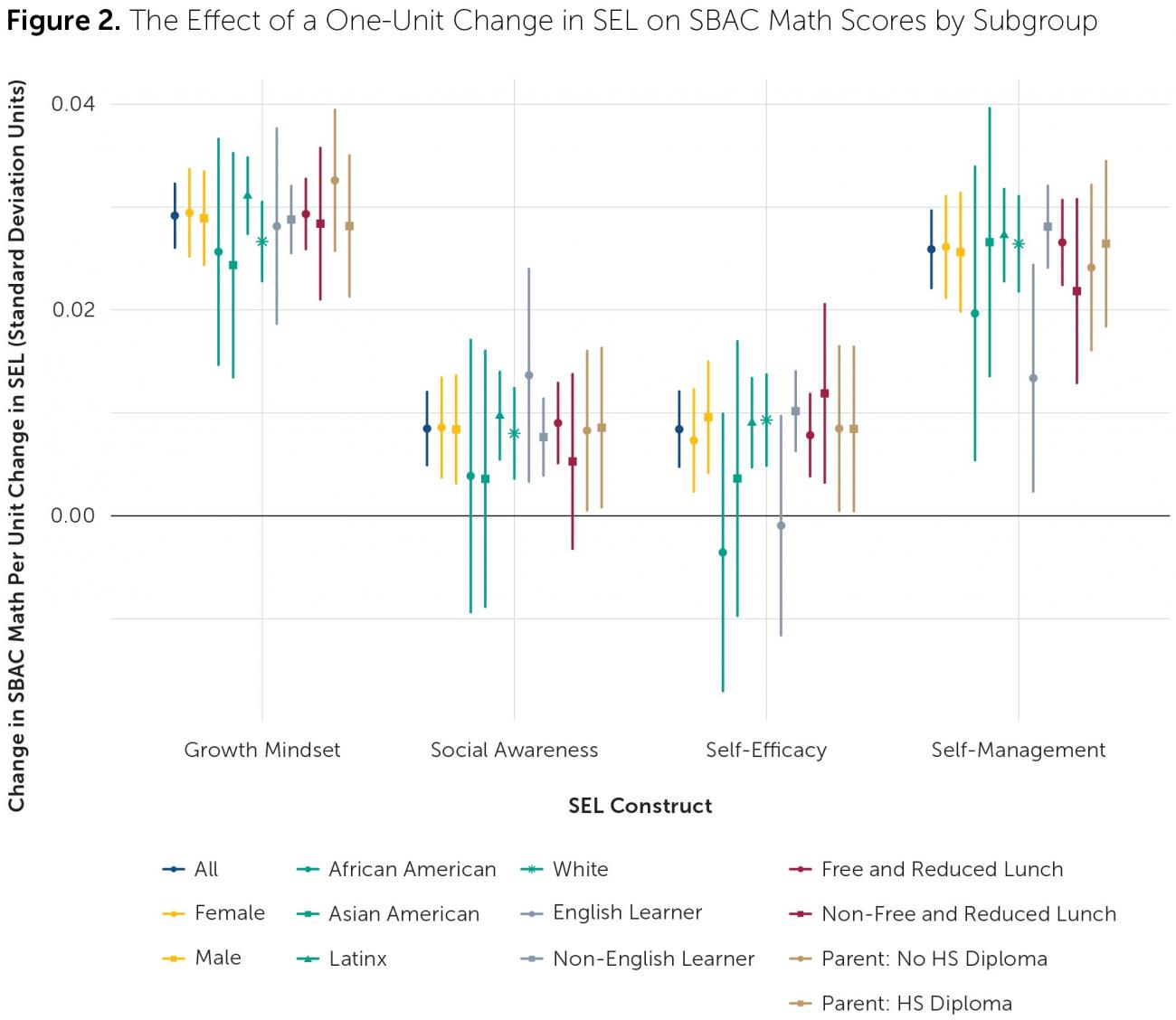 Figure 2 shows the association between the change in SEL and the change in SBAC math within each subgroup, grouped by SEL construct. As with Figure 1, the dot indicates the effect, in standard deviation units, of a one standard deviation increase in that SEL construct, with the line indicating the 95 percent confidence interval for each group. Now, instead of focusing on the size of the effect, we are interested in consistency across subgroups. Visually, if the estimates for each subgroup within a construct are clustered together, with the lines overlapping, we can conclude the that expected change in outcome relative to the change in SEL construct is similar across subgroups. Figure 2 shows little variation in the relationship between change in SEL and change in SBAC math across the subgroups. Though the point estimates differ slightly, the confidence intervals overlap for each construct, implying little significant difference among groups. The one observed difference is for English learners (ELs): social awareness predicts math a little more and self-management predicts math a little less for ELs than for other students. We also observe that the relationships are noisy for African Americans and Asian Americans in the sample, therefore we cannot assert that they do not differ from the rest. The full working paper shows that relationships are similar for ELA and attendance.

Finding 3. Improvements in SEL Are Related to Gains in ELA, Math, and Attendance, Regardless of Starting SEL

While the relationship between changes in SEL and changes in other outcomes does not vary by student demographics, it does vary somewhat by students’ SEL level. Students see consistent benefits associated with increasing their SEL—regardless of where they start. To illustrate this improvement, we divide students into five quintiles based on their starting SEL in the 2014–15 school year and describe the relationship between SEL improvement and improvements in other outcomes im each group. As an example. 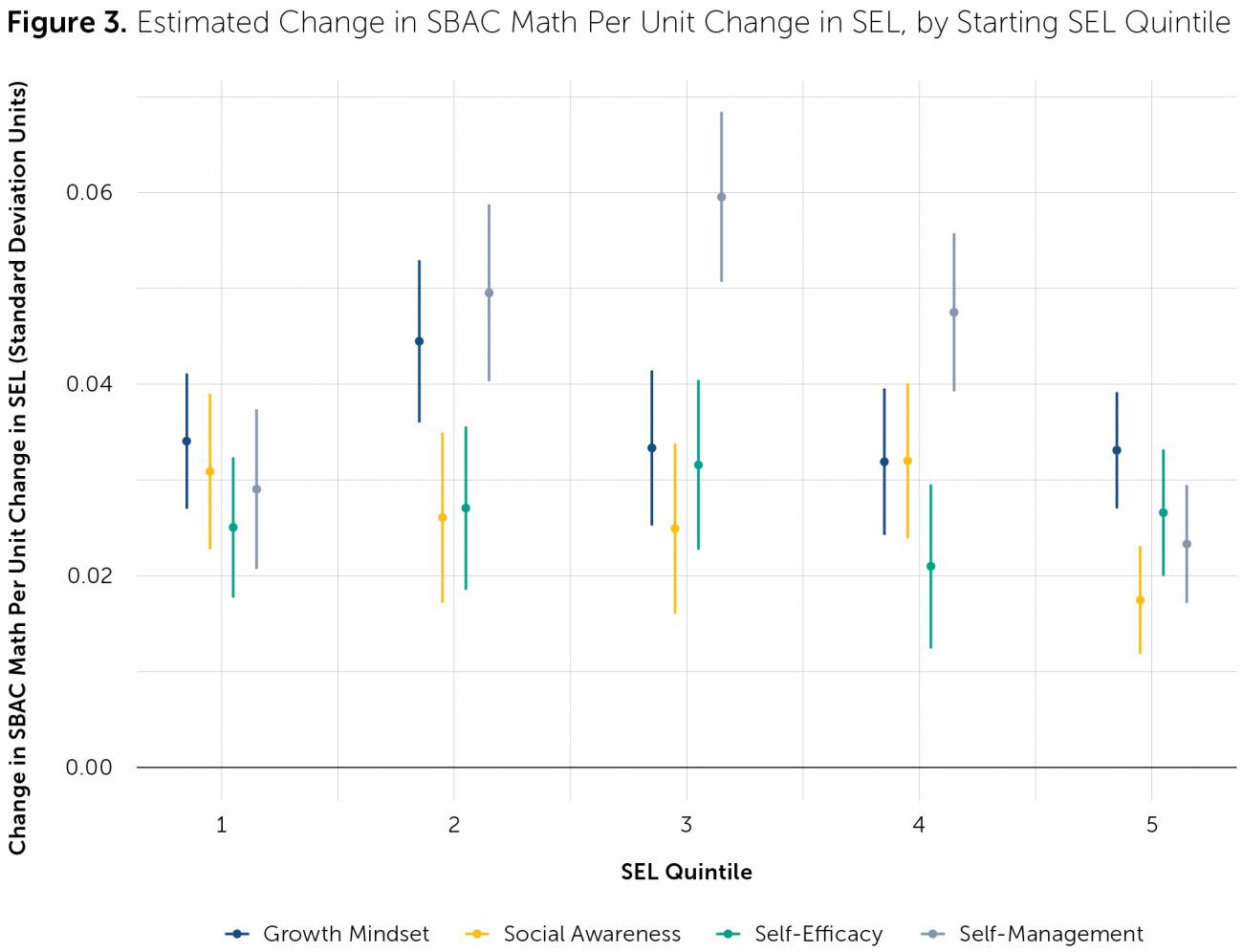 These patterns for SBAC math hold for SBAC ELA and attendance as well. All students see academic gains associated with their SEL increases.

Finding 4. For Students with Low Test Scores, Improvements in Growth Mindset and Self-Management Are Associated With the Largest Gains in Future Outcomes 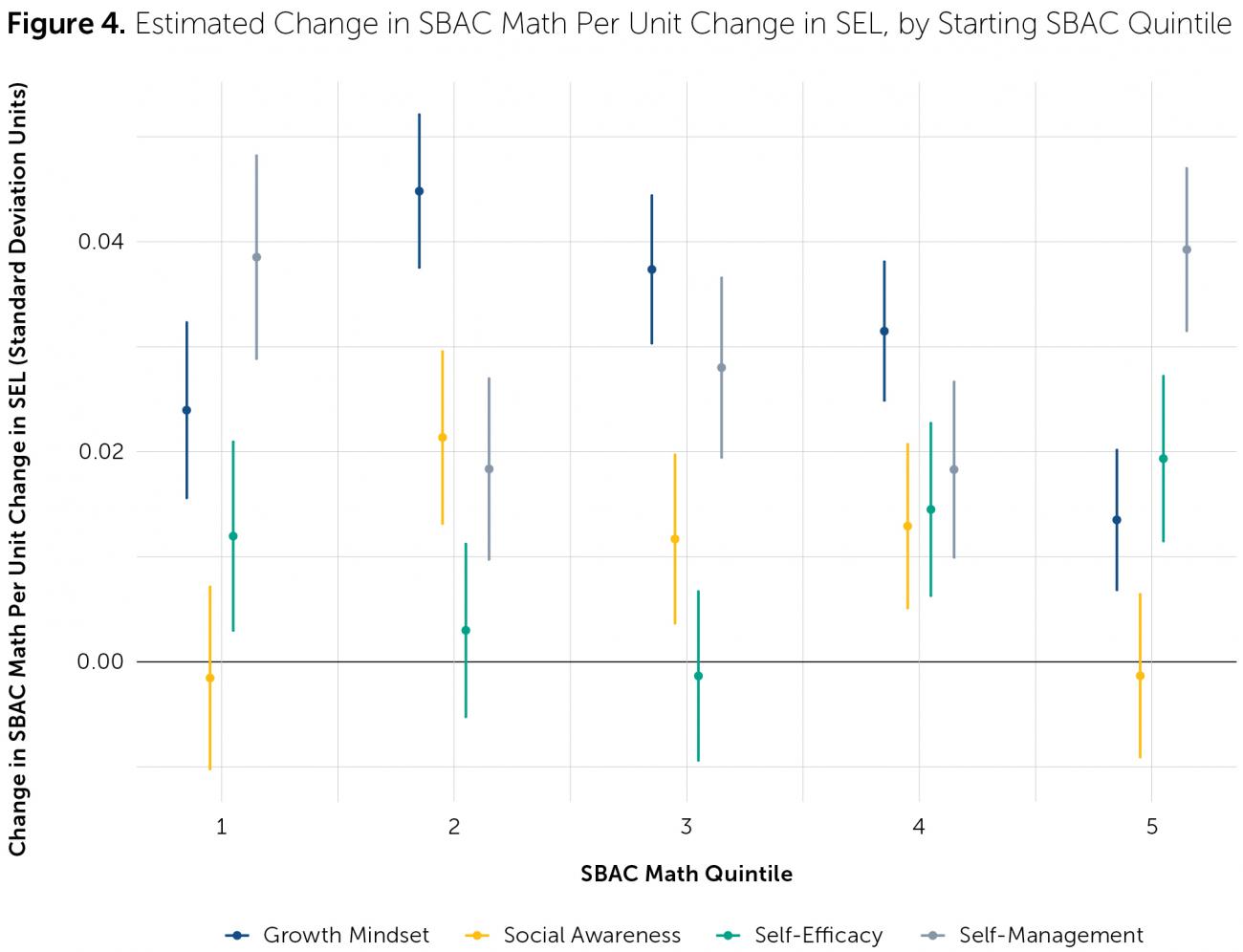 Within our sample of fourth to eighth grade students in California, we see that improving SEL is associated with improvement in SBAC math, SBAC ELA, and attendance rates. These improvements go above and beyond normal cohort trends. We find that the associations between SEL improvement and outcome improvement hold across subgroups, are largest for students who usually have the lowest levels of SEL, and are consistent across achievement level.

These results point to the conclusion that the survey measures not only capture real differences across students in the year that they are collected but also that changes over time in students’ self-reported SEL also capture real changes in student well-being. Based on our findings, we recommend that schools invest each year in collecting such measures and continue to use them to understand and track their students’ multidimensional development.

To date, we do not have strong clear evidence about whether changes in SEL cause the observed changes in achievement or attendance, whether changes in achievement or attendance cause changes in SEL, or whether an outside factor leads simultaneously to increases in both measured SEL and other outcomes. Nonetheless, the predictive power of the SEL measures demonstrated in this study provides initial support for continued investment in both the measurement of SEL and, more importantly, the development of social-emotional skills for school-age children.

For schools unsure of how to start, our results suggest changes in growth mindset and self-management to be most predictive of positive outcomes, where the increases in achievement associated with a one standard deviation increase in SEL can be as high as an additional 25 percent of the average annual learning gains. These findings and focus are consistent with previous studies that also found levels of growth mindset and self- management associated with higher levels of academic and behavioral outcomes.

Endnotes and explanatory notes can be found in the full brief here.